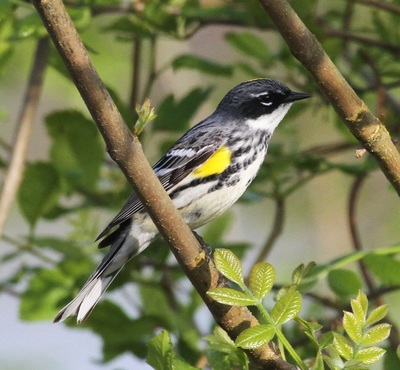 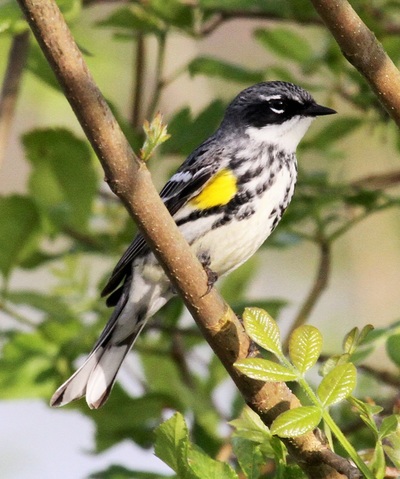 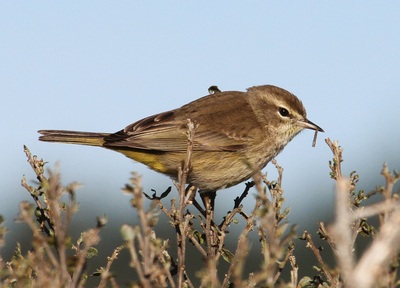 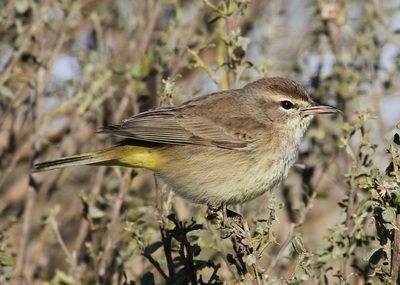 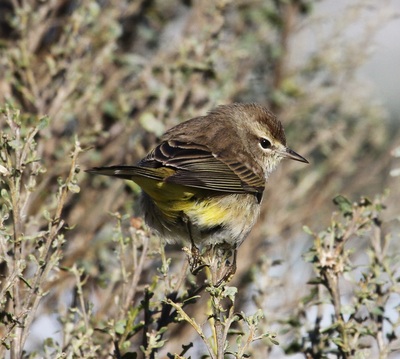 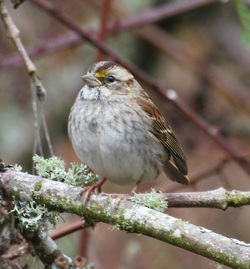 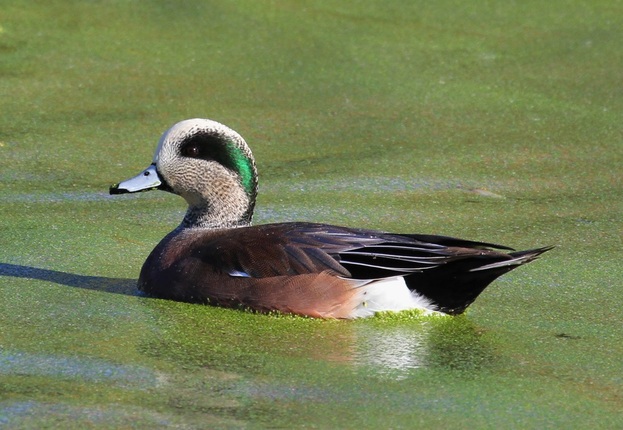 ﻿﻿888﻿November 2014: Lots of good stuff lately in my wanderings around the Willamette Valley and elsewhere:

﻿Red-shouldered Hawks:﻿ three different individuals on the Lincoln County coast, with the most reliable being the juvenile hanging out around Beaver Creek (8 miles south of Newport). This bird spends a fair amount of time on the wires along the highway just north of the entrance to Ona Beach.
Ankeny NWR: The Northern Shrike I found earlier in November has apparently not been rediscovered; Bald Eagles have returned, as a have a few Tundra Swans. Among the many duck species present in the past week have been a nice flock of Ring-necked Ducks and quite a few Hooded Mergansers. A flock of Dunlin remained on the refuge through the freeze and I watched them land on the ice one early morning. Last week I was late (after dark) departing the refuge and was surprised by a windshield near-miss of a Western Screech-Owl along Ankeny Hill Road.
Minto-Brown and Salem outskirts: An adult Cooper's Hawk showed up in the middle of the dog park about 10 days ago and within the same week I lucked into sightings of several Sharp-shinned Hawks and an adult Goshawk in the Salem River Road South area.
Talking Waters Gardens, Albany: A Black Phoebe continues to hang out near the little waterfall feature on the north end and it was singing when I lucked into it on Sunday, Nov. 16. That same day I found a total of three Green Herons and the ponds are currently loaded with American Wigeon. A number of Gadwall are also present, along with several other duck species.
﻿﻿﻿

9/1/13: Black Butte, Central Oregon. Started at dawn (if you are birding Black Butte, start the hike no later than dawn because the birds are more active early and more importantly the trail tends to get very busy later in the morning) and found all the usual common Butte birds in abundance: Green-tailed Towhee, Fox Sparrow, Townsend's Solitaire, all three nuthatches, Cassin's Finch, Hermit Thrush, Clark's Nutcracker, Hairy Woodpecker, Sooty Grouse, Western Tanager; flyover by two Black-backed Woodpeckers, and the most impressive sight was a
massive flock of mixed Warblers (I counted six species)--I'd guess the hillside (south face where the trail cuts through the oldest burn) held between 500 and 1,000 warblers. 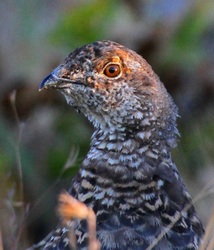 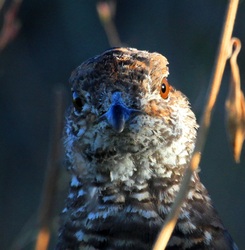 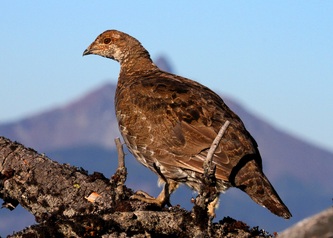 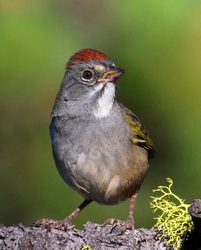 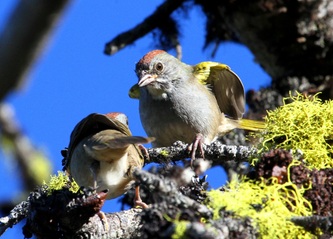 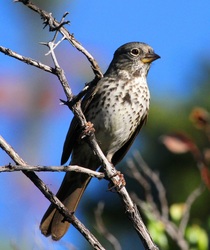 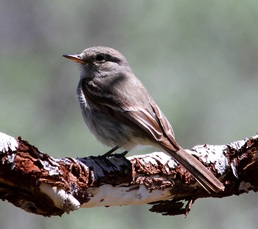 Gray Flycatcher
Catnip Mountain rises to 7,300 feet in the Great Basin desert just east of Sheldon National Wildlife Refuge in northwest Nevada. The elevation allows for prodigious mountain mahogany groves, which attract a lot of songbirds, particularly in migration. I would have liked to have climbed the summit about 2 weeks earlier for a potential chance for oddballs, but this trip did result in a substantial list: Lark, Vesper, Sage, Brewer's, Black-throated sparrows; Townsend's Warblers; Blue-gray Gnatcatchers; Gray and Dusky Flycatchers; Green-tailed Towhees; Rock Wrens; Horned Larks; Western Tanagers; Cassin's and Warbling Vireos; Sage Thrashers; Red-breasted Nuthatch. Near camp, Poorwills called frequently beginning at dusk; and when the moon rose at 3 a.m. or thereabouts, Sage Thrashers began singing furiously. Sage Grouse sign was commonplace, but we did not see any birds (though they are common in the area). 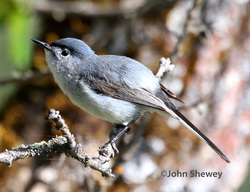 Blue-gray Gnatcatcher
During the course of a combined fly-fishing/birding photo shoot in southern Oregon, I amassed a substantial list of species without working too hard at it. Upper and Lower Table Rocks are outstanding birding areas and nearby Touvelle State Park and Ken Denman WMA are also excellent. Upper Table Rock, starting just after sunup, produced (among many species) all three species of Towhees that breed in Oregon: I was surprised to stumble on a single Green-tailed Towhee to complete the Towhee Trifecta. The Cali Towhee was easy--pulling into the parking lot for the Upper Table Rock Trailhead, my freshly washed shiny black truck was promptly attacked by a Cali Towhee who evidently saw his reflection. Other highlights included Blue-gray Gnatcatchers and Ash-throated Flycatchers. As usual, Touvelle had lots of Acorn Woodpeckers. Perhaps the biggest surprise of the trip was a single Eastern Kingbird on Tresham Lane just west of the junction of Table Rock Road. Please see the photo gallery from this trip on my Field Notes page.

5-10-13: Head of Jack Creek/Indian Ford CG/Lower Bridge
Brief stops at each location, mostly to see what warblers were out and about. Head of Jack Creek produced MacGillivray's and Nashville, along with Yellow-rumped, but also produced no fewer than three flycatchers: by song I identified Willow, WW Pewee, and Olive-sided. Also Cassin's Finches and Red Crossbills, and five species of woodpecker. Indian Ford had lots of singing Common Yellowthroats, along with MacGillvray's, Orange-crowned, Yellow, Yellow-rumped, and a single Yellow-breasted Chat (which I have not seen or heard there before), along with Cassin's Vireos. Lower Bridge produced only two Yellow Warblers and two Orange-crowned Warblers, but I only checked the grove adjacent to the parking lot.

5-4-13: Mary's Peak
The trick with Mary's Peak is to get there at sunup when the birds are most active and before the mountaintop is swarming with people. I did just that today. Highlights included plenty of warblers: Yellow-rumped, Hermit, Townsend's, Black-throated Gray; also Western Bluebirds (one being harassed by a female Rufous-throated Hummer), a small flock Red Crossbills, a few Band-tailed Pigeons, one Ruffed Grouse, and a male Calliope Hummingbird, among a number of other common species. 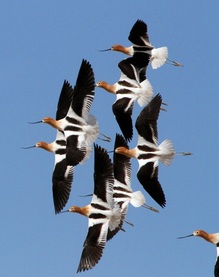 American Avocets
4-21-13: Shirk Ranch and SE Oregon
Shirk Ranch produced all the usual suspects to be expected around a water source in Guano Basin at this time of year, with the one surprise being a single Golden-crowned Sparrow.
That's a long ways from normal for a spring GC Sparrow: If you don't know where Shirk Ranch is located, Google it; if you go, take the correct road, take a high-clearance 4WD, take two spare tires (take two of everything), and have your dental work checked when you get back. It's a great, little-used, accessible spring spot for birding Southeast Oregon. Another location produced this shot of American Avocets in flight (they were at a tiny, nearly dry water hole 15 miles as a crow flies from any other water source).

4-15-13: Minto Brown Park, Salem
On the same day that a Palm Warbler was reported from Ankeny NWR, I found one at Minto Brown Park in Salem (at the dog park, along the path that leads to the paved pathway along the east edge of the off-leash area). Also two Orange-crowned warblers and singing Common Yellowthroats. 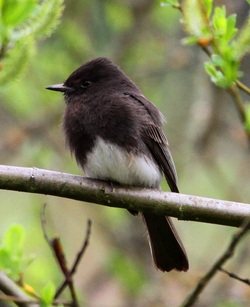 4-4-13: Ankeny National Wildlife Refuge
The pair of Black Phoebes are still hanging out at the westernmost end of the boardwalk leading to Wood Duck Pond. They have been there for two months now. 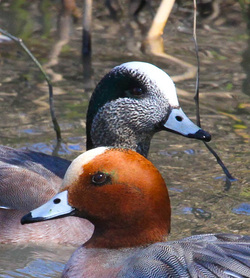 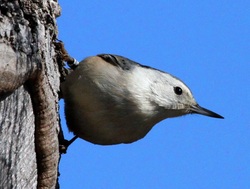 Banded White-breasted Nuthatch, Finley NWR
3-8-13: Finley National Wildlife Refuge
Not much in the way of migratory songbird movement yet. One large flock of peeps at long distance at the flooded field at the north entrance, Acorn Woodpeckers at the HQ, a banded White-breasted Nuthatch at HQ feeders (see photo), and a very brief look a something leucistic--probably a Golden-crowned Sparrow (also at HQ). The usual array of spring ducks, and of course the drakes are nicely colored this time of year. (Click photo to enlarge) 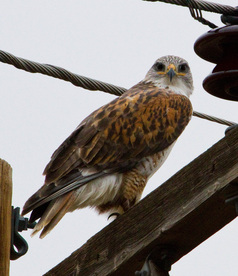 3-1,2: Harney County
Got out with Tim Blount (harneybirder.com) to wander through a little of Harney County. Lots of Snow Geese arriving now, with biggest numbers down around The Narrows; still lots and lots of Tundra Swans; 2 Trumpeters near Frenchglen; huge flocks of Pintail and lots of Shoveler and Common Goldeneye; Sandhill Cranes arriving; a few Say's Phoebes are around now; scattered Mountain Bluebirds; lots of Bald Eagles and RL Hawks; Ferruginous Hawks are arriving. A highlight for me was climbing high into the Baker Pass area and getting a fly-over from a large flock of Rosy Finches; thereabouts, a fair number of Chukars, many paired up and if you know where to listen, the cock-birds are crowing like barnyard roosters. Tim and I studied each and every group of Horned Larks and despite our best efforts we could not turn any of the Larks into Longspurs or Buntings.  (Click photo to enlarge)

2-21-13: Harney County
Tim Blount (harneybirder.com) reports the first of the white geese for this year's migration in a field near Lawen (Highway 78, 15 miles south of Burns); presumably they are Snow Geese (because of the early date), but Tim was unable to get close enough to confirm whether they are Snows or Ross's. For more info, please see my "Field Notes" page.

2-17-13. Salem Area Harbingers of Spring
Annually a small flock of Western Bluebirds shows up at Minto-Brown Park in Salem during late winter, usually in the off-leash area (at least that's where I see them), and they were there 2/17; a Turkey Vulture was circling the southeast quadrant of the park, and later that day I saw another small flock of Western Bluebirds along State Street east of town, about 1/2 mile west of Howell Prairie Road. 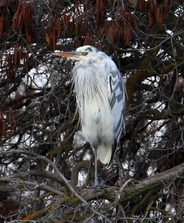 1-30/31-13
The leucistic Great Blue Heron continues at Celilo Park on Interstate-84 east of John Day and west of Biggs. The bird has been roosting in the trees across the channel from the boat ramp (click photo to enlarge). Lots of Bald Eagles on the Columbia and if you are driving I-84 early in the morning, look for them roosting in the scraggly trees at milepost 79 (west of  The Dalles) between the freeway and the river--there were 15 roosting there at 8am on 1/30. One American Pipit at Wasco sewage ponds. Lots of ducks (myriad species) in the Columbia sloughs and ponds.

1-24 and 1-25-13: Harney County: three Snow Buntings on Hwy. 395, milepost 17.5; several Northern Shrikes along Hwy. 78 (the first a few miles north of Crane, the others two south of Princeton); lots of raptors, including a spectacular, striking dark-phase Rough-legged Hawk on top of Wright's Point on Hwy. 205. The pond at MNWR HQ had one Canvasback, several Ringnecks Ducks, several Common Goldeneyes, a small flock of Widgeon, and a few Buffleheads yesterday. A pair of mature Golden Eagles joined me on a chukar hunt in Lake County, dropping down to the deck once me and the dog started upslope and then patrolling back and forth along the ground upslope from us, no doubt hoping we would push running chukars uphill. Very  well-educated eagles! I had a similar experience with a Northern Goshawk a number of years ago.

1-18-13: Ankeny NWR: Extreme fog and plenty cold, but the Red-shouldered Hawk was on the hunt and I watched him kill a rodent by plunging straight down off his perch and into a roadside ditch (still have not determined whether Ankeny has one or two Red-shoulder Hawks this winter). I lucked into a Black Phoebe on the northwest corner of South Pond. In the woods along the trail between South Pond and the parking lot, a Great-horned Owl was hooting at about 4 p.m. Lots of White-crowned and Golden-crowned Sparrows in certain locations, but the White-throated Sparrows have been avoiding me the past two trips.

12-30-12: Ankeny NWR: The sun finally made an appearance! Right off the bat, I stumbled into three White-throated Sparrows at the Pintail Marsh parking lot; the Red-shouldered Hawk or Hawks (I still can't figure out if there is one or two) is/are still there; a pair of Acorn Woodpeckers were prancing around on a fencepost across the road from the north edge of the refuge (just east of the big, pretty white house on the south side of the road); but I actually spent most of my day chasing myriad flocks of Kinglets around trying to line up a bright male in a sunny spot at close range....it took hours, but I managed to get a few decent shots. They are amazingly colorful little birds, but they sure don't like to hold still! 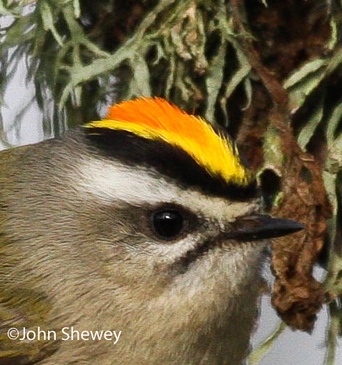 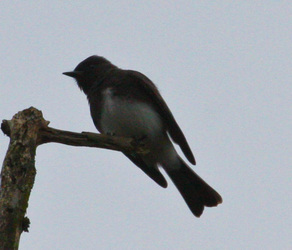 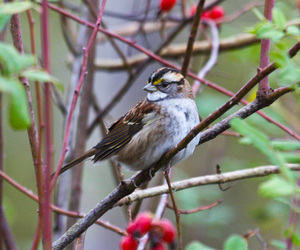 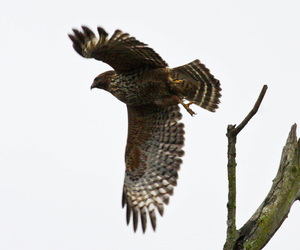